BPM Studio is a software for professional and hobby DJs developed by the company Alcatech. It’s still favored by a consistent and loyal clientele, but lately, users want to switch to another software. As moving FileArchives manually would be a huge expenditure of time, we added a way to import your database from BPM Studio to UltraMixer in a few clicks.

Similarities of BPM Studio and UltraMixer #

Just like BPM Studio, we offer three different versions: Home, Basic, and Pro Entertain. You will find details of each version and the features here.

The user interface of both programs is constructed similarly. It’s divided into two decks with an inherent playlist and control elements. You will have similar features and many more in addition – first of all, the ability of UltraMixer to support MIDI Controller.

The archive in BPM Studio is also comparable to UltraMixer’s FileArchive. This is the reason transferring your files will be so easy.

Move from BPM Studio to UltraMixer #

ℹ️    Make sure your BPM Studio and UltraMixer are both installed on your PC before moving the Archive.

Start UltraMixer and click on the arrow between “Archive” and “Mixer” in the menu bar at the bottom and select “Import” > “Import BPM Studio FileArchive”.

In the Database Importer, click on “Choose DJ software” and BPM-Studio will be displayed. Choose “BPM-Studio data directory”. Now you can select your music archive on your computer.

Click “Import DataBase” and your file archive will be imported to UltraMixer. 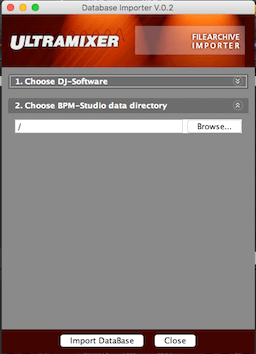 What will be imported? #

All tracks including the ID3 tags (artist, title, length, BPM, etc.) are adopted

UltraMixer imports up to 6 cue points

As in BPM Studio only the file paths to the music get copied into UltraMixer, not the music itself! If you relocate single titles UltraMixer won’t be able to play them anymore.

Of course it’s possible to export archives out of UltraMixer at any time. Just click on the arrow between “Archives” and “Mixer” again and choose the requested action under “Export”.

And that’s how to move from BPM Studio to UltraMixer!

What are your Feelings